Day 3 was a very busy day that started quite early for us.  We were recording videos this morning at 6 am on the Sea of Galilee and then we had to have breakfast and be on the road by 7:30.  Here is a brief summary of the sites that we visited today:

Mount Arbel – On the western side of the Sea of Galilee rises a mountain that has a significant cliff on one side.  This particular mountain is significant for at least one major reason: that of it’s affect on the weather around the Sea of Galilee.  When we read of storms coming up quickly on the Sea of Galilee it is often because of the wind tunnel that is created on the northern side of Mount Arbel.  High winds are created in the valley that then spill out onto the Sea making very dangerous conditions.  Maybe the storm that we read about in Matthew 8 as Jesus is sleeping in the boat was caused by the high winds that often come from this tunnel.  Don’t miss the question that the disciples begin to ask as they witnessed Jesus’ miraculous control of the wind and waves: “What kind of man is this”?  By the way, that is an important question for each of us to answer. 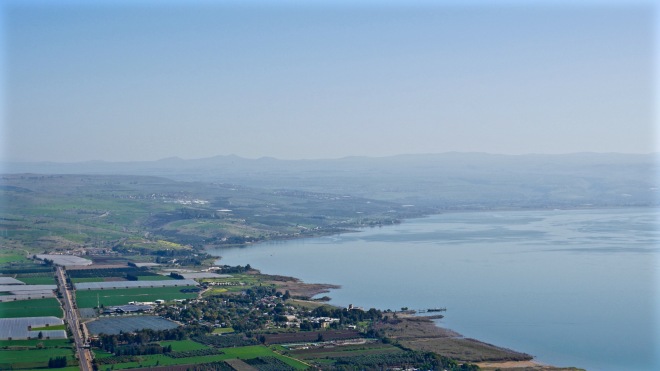 Bethsaida – Next we traveled up the coast to the city of Bethsaida – a fishing village on what used to be the northern shore of the Sea of Galilee.  Today, when you visit the ruins of Bethsaida you will notice that the Sea is nearly 2 miles from this location.  It’s hard to imagine that the fishermen of this town would carry equipment and boats 2 miles to work everyday!  What we now know is that they didn’t.  The Sea of Galilee and much of Israel sits right on the rift of 2 plates causing a fault.  The Asia Plate and the Africa plate meet here and occasionally there are significant earthquakes.  Over the past 2,000 years earthquakes have changed the location of the Sea at the northern edge.  This town was very prominent in Jesus’ earthly ministry.  Peter, Andrew and Philip were all from the town of Bethsaida.  Check out Mark 8 and see how Jesus healed a blind man in Bethsaida.  You may also want to examine Matthew 11 to see the clear judgment pronounced against Bethsaida because of their rejection of Him.  Bethsaida forces us to ask the question – have we truly chosen to follow Jesus, he urges us to come and see, but he calls us to go and die.  At some point his offer will cease and you want to be ready.

Chorazin – One of my favorite locations so far was next: Chorazin.  Chorazin is another one of the towns that Jesus spent much of his time in during his earthly ministry. Regularly Jesus could have been found teaching in the synagogues around Galilee, one of which was at Chorazin.  Today at Chorazin you can see the remnants of a 3rd Century synagogue.  This was not the synagogue in which Jesus taught, however it was very close to his time.  It was at this sight that an amazing discovery was made: an actual seat of Moses.  Every synagogue housed a seat of Moses where the Rabbi would sit and teach from the Law and the Prophets.  Jesus would have sat and taught from the seat of Moses in this location!  You will be seeing more about this particular location during our Six Days To Die series. 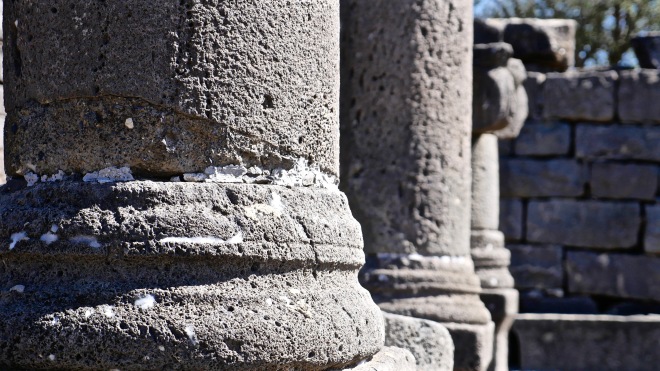 1st Century Boat – Next we were able to see an amazing archaeological find from the shores of Galilee – a fishing boat from the 1st century.  This was very much like a boat that Jesus and his disciples would have traveled in during the many trips across the Sea of Galilee.

Capernaum – The town of Capernaum became the home-base for Jesus’ ministry in Galilee, in fact often the Gospels call Capernaum his “home” even though he was actually from Nazareth.  Jesus spent much time here.  It was here that Peter’s mother in law resided and was healed by Jesus while laying on her death bed.  Check out Matthew 8 to read about this miracle as well as the healing of a Roman Centurion’s servant – which took place in Capernaum.  The picture below is from the Synagogue in Capernaum, a place where Jesus would have taught and declared his Gospel. 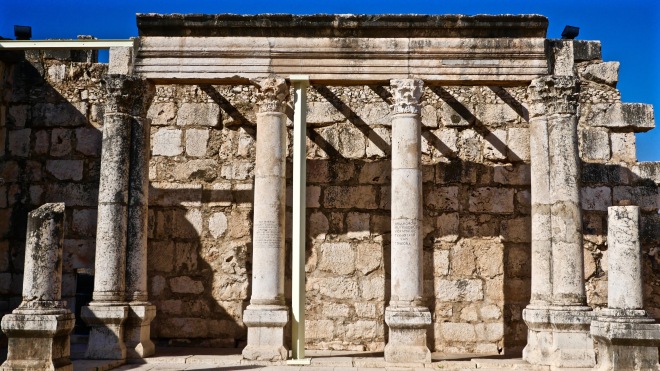 Tabgha – Our next stop was a location that I had never heard of and you won’t find this name in your Bible, however it is likely the site of a few very important events.  Tabgha is the location of 7 hot springs right on the shoreline of the Sea of Galilee.  These 7 hot springs make a very attractive fishing spot for the local fisherman – including those 2,000 years ago.  Many now believe that this location might have been the spot from which Jesus called Peter and Andrew to “follow Him and become fishers of men”.  If this is that location – what an important sight.  All of Christianity is based on the fact that Christ died for all, and now: found people find people!  That was Jesus’ agenda then and it is remains today.

Secondly, this may also be the location from which Jesus met Peter after his epic failure.  Peter had denied Christ three times and subsequently Jesus restored him next a “fire of coals” on the beach.  Check out John 21 and remember the amazing compassion of our God.

Sea of Galilee – Tiberias – The last portion of our day was spent out on the Sea of Galilee next to the city of Tiberias.  The location of Tiberias on the western shore of the Sea is the reason behind the Sea also being called the Sea of Tiberias.  At this location we took time to reflect on the miracles that took place actually on the water.  One of which is the walking on water of Jesus and Peter.  Wow, what a reminder!  Check out Matthew 14 and remember that knowing and trusting Jesus always go hand in hand.  You can’t trust Him if you don’t know Him and if you know Him you should trust Him!

Tomorrow we will be moving on from the Sea of Galilee to the areas around the Dead Sea.  Stay tuned for more to come!