Ok, I know I’m going a little out-of-order but after many hours without sleep and lots of work, this is the day that is the most fresh in my mind right now.  I will get back to Turkey I promise.

Our fifth day in Turkey started in a very special way…with a 2:15 am wake up call.  I wish I was kidding, however this is actually true.   We needed to be packed and ready to leave Kusadassi by 3:15 in order to make our 1 hour drive back to Izmir and then board a plane for Istanbul by 5:15 am.  Once we arrived in Istanbul we then had to say goodbye to our Turkish guide Shebnem who was absolutely amazing.  We then boarded a plane destined for Athens, Greece in order to continue the next leg of our journey.  Our day in Athens was a short one due to our early morning travel, however we were able to two different sites: Mars Hill and the Acropolis of Athens.

The Stoics were focused on the eternal soul and the material was not of much consequence to them.

The Epicureans were focused on this life – eat, drink and be merry for tomorrow we die!

It was at the gathering of the Areopagus that Paul was invited to come and explain this new philosophy – the idea of the resurrection!  Neither of these groups embraced the idea of the resurrection.  Afterlife?  Yes, but not in bodily form because the Stoics wanted to be free from the body.  So, Paul came and in approximately 90 seconds shared an amazing summary of the gospel with arguments from small to great.  Some responded by laughing, some with curiosity and at least 2 responded in faith.  Here are two thoughts for you regarding Mars Hill and Acts 17.  First, our faith needs to come into the public arena in a way that is accessible and understandable for others.  Notice how Paul engaged them in a way that they would understand, even quoting from their own poets.  Second, Paul talked about something that resonates in our culture – the fact that the Athenians were unsure about the idea of heaven and the afterlife.  So are many in our culture and yet because of Jesus’ resurrection what may seem unsure has been made sure for those who trust in Him 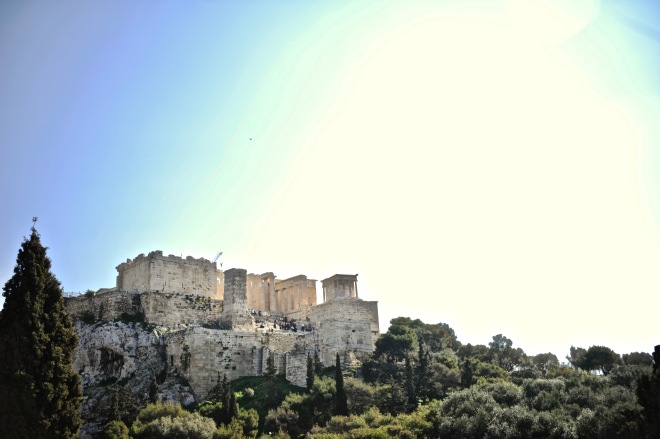 Are you sure of your eternal destination?

Oh, by the way, we were able to visit the Parthenon, one of the single most recognizable locations in antiquity.  Here the King/Priests of Athens resided before the development of democracy here in Athens.  Eventually, the goddess Athena was worshipped here as the Athenian patron god.

Now, just a little touch of what tomorrow will bring.  Tomorrow we will be in Corinth and I can’t wait to share all of that with you.